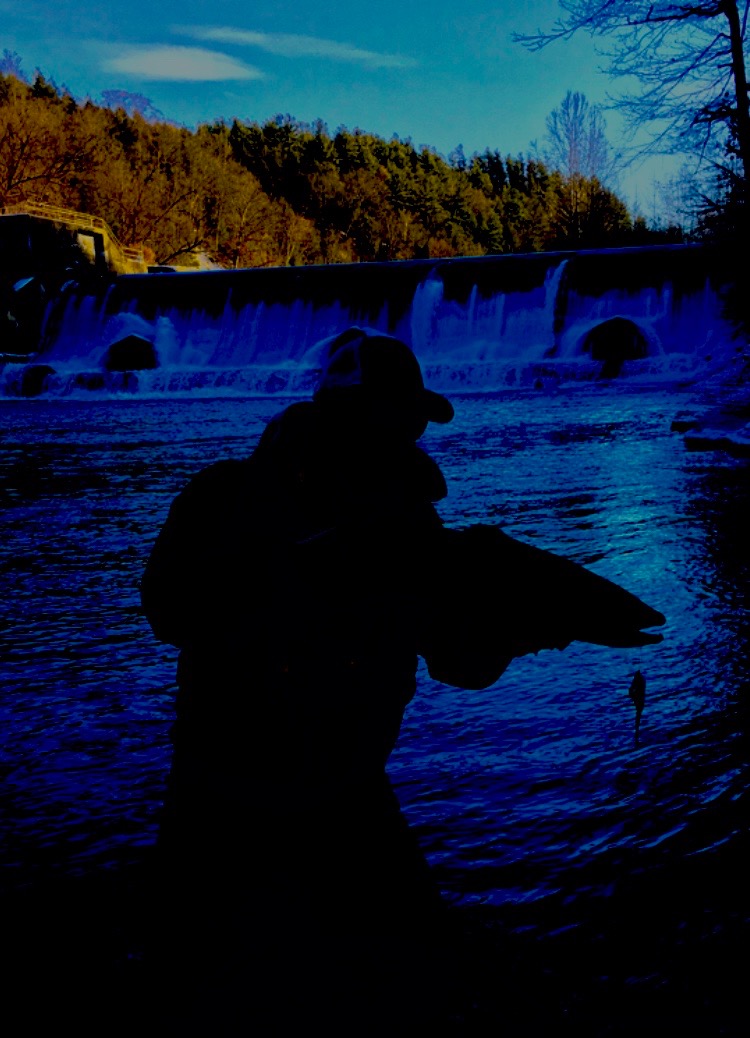 Time to say goodbye for a little while
Well, it's getting to be that time of year again. We still have a lot of steelhead in the rivers, but the water temps are getting significantly above 65 degrees and staying above it for most the day on most of our rivers. That's just too warm to fish steelhead unless we get a cool down, which according to the weather doesn't look too likely. Though there are a few days where the highs are projected to be in the high 50's over the next two weeks, most days are in the upper 60's to upper 70's which means water temperatures will stay in the low to mid sixties, even on cool days, and will spike up even higher on warm ones. So it looks like steelhead season has come to an end.
Looking back over the fall 2017 and spring 2018 season, we had some of the best fishing I've seen in years. The past fall in New York was easily the best steelhead season we've seen in the past four or five years, with the Catt coming into play very early in October and fishing extremely well that entire month. Flows were perfect for swinging dry lines and numbers of fish willing to play were high. Then in November, despite the Catt being out of the picture essentially that entire month, the smaller creeks really came into play with good numbers, despite the early cold snap the second and third week. Over the fall and early winter, we found some very large fish, up to mid-thirties in inches and low-mid teens in weight, especially in December.
Then starting in February, Ohio really started fishing well, with good numbers of fish running on every high water period until the end of April. Though we didn't land any monsters this spring, with the biggest fish being in the thirty inch ranges, we certainly hooked some that were much larger, including on Art hooked one the Chagrin that stayed deep and ran upstream through heavy water and we just could not turn it. It ended up wrapping the line around a big piece of slate and broke us off, but damn it would have been nice to see that fish.
One very pleasant surprise was how well all the Ohio rivers fished this spring. In most springs though we'll have good fishing on all the rivers periodically throughout the spring, there usually is one river that is clearly fishing better than all the rest on a consistent basis. I think it simply has to do with waterflows being prime at the right time as a large school of steelhead are cruising in the lake nearby and decide to run the river. This spring it seemed like each river had roughly equal amounts of fish in them. This is certainly a trend I hope continues as it made for nearly three months of perfect fishing somewhere along the Ohio Lake Erie tributary systems.
Going forward, we're going to be switching to trout and smallmouth, but things are going to quiet down for us a bit, as they normally do between May and early October. We're already seeing some really nice smallies, but want to give the steelhead a chance to drop out before we really start fishing them, as this time of year you can catch a steelhead and a smallmouth on back to back casts. Only problem is water temperature. If you really need to get another steelhead in before the end, please bring a thermometer with you and just be mindful. We've had seven full months of great steelheading already.
Tight Lines
- D

Reply yeezy 700
1:02 AM on July 9, 2022
I happen to be commenting to let you understand of the exceptional experience my girl had browsing your site. She noticed numerous issues, including how it is like to have an incredible coaching style to let many more quite simply master chosen hard to do things. You undoubtedly surpassed my expected results. Thank you for showing the good, dependable, revealing not to mention fun guidance on the topic to Kate.
yeezy 700 http://www.yeezy-shoes.us.org

Reply kobe sneakers
1:02 AM on July 9, 2022
I simply wanted to post a remark so as to appreciate you for the stunning tips you are sharing at this website. My incredibly long internet look up has at the end been compensated with incredibly good concept to go over with my relatives. I would believe that many of us readers are really endowed to dwell in a wonderful site with so many lovely professionals with beneficial strategies. I feel truly fortunate to have come across the webpages and look forward to tons of more entertaining moments reading here. Thanks a lot again for all the details.
kobe sneakers http://www.kobesneakers.com

Reply cheap kyrie 7
1:03 AM on July 9, 2022
I actually wanted to type a quick note in order to express gratitude to you for all the lovely recommendations you are sharing at this site. My time consuming internet investigation has at the end of the day been recognized with good quality ideas to share with my neighbours. I would express that many of us website visitors are quite fortunate to be in a perfect network with so many awesome people with good tips and hints. I feel very much privileged to have encountered your entire site and look forward to tons of more fabulous moments reading here. Thanks again for a lot of things.
cheap kyrie 7 http://www.kyrie7.us

Reply off white outlet
1:04 AM on July 9, 2022
I'm also commenting to let you be aware of what a nice experience my girl gained browsing the blog. She figured out such a lot of things, with the inclusion of what it's like to possess an awesome giving mood to let many others just completely grasp specified multifaceted topics. You really surpassed my desires. Many thanks for churning out the helpful, trusted, informative not to mention unique guidance on this topic to Mary.
off white outlet http://www.off-whiteoutlet.us.com

Reply supreme outlet
1:04 AM on July 9, 2022
Thank you for your whole hard work on this website. Gloria really likes making time for research and it is easy to see why. Most of us know all of the dynamic method you create very useful solutions on your web site and in addition increase response from others on this article and our own daughter is now discovering so much. Enjoy the remaining portion of the year. You have been doing a remarkable job.
supreme outlet http://www.supreme.us.org

Reply off white outlet
1:04 AM on July 9, 2022
I actually wanted to type a simple remark in order to say thanks to you for some of the fabulous points you are showing on this site. My extended internet look up has finally been rewarded with reasonable concept to exchange with my two friends. I would mention that most of us visitors actually are very fortunate to live in a fabulous community with so many awesome professionals with insightful tips and hints. I feel quite grateful to have encountered the website page and look forward to some more entertaining minutes reading here. Thanks once again for everything.
off white outlet http://www.offwhitesonline.com

Reply cheap kd shoes
1:05 AM on July 9, 2022
I simply had to say thanks once more. I'm not certain what I could possibly have carried out without the ways shown by you regarding this area of interest. It became a frustrating matter for me, nevertheless encountering the specialized tactic you treated that made me to cry over happiness. I'm just grateful for this work and in addition hope that you comprehend what an amazing job you are undertaking instructing other individuals by way of your site. I am certain you haven't got to know any of us.
cheap kd shoes http://www.kevindurantshoes.us.com

Reply kd shoes
7:07 AM on July 9, 2022
I have to point out my love for your generosity supporting men and women who absolutely need help on the subject. Your real dedication to getting the solution all over appears to be exceedingly significant and have surely helped many people just like me to achieve their dreams. Your entire useful help implies this much a person like me and much more to my fellow workers. Regards; from all of us.
kd shoes http://www.kd-shoes.us

Reply supreme clothing
7:08 AM on July 9, 2022
Thanks a lot for giving everyone an extremely superb chance to check tips from here. It is usually very good plus full of a great time for me and my office peers to search your website the equivalent of three times in 7 days to study the new secrets you have got. And lastly, I'm so actually fascinated concerning the unique knowledge you give. Some 1 points in this article are certainly the finest we have ever had.
supreme clothing http://www.supremes-clothing.com

Reply curry 6 shoes
7:10 AM on July 9, 2022
I intended to post you this very small observation just to thank you very much once again for these magnificent opinions you have contributed on this site. It has been certainly unbelievably generous of you to convey unreservedly all a few people could possibly have made available for an e-book to help make some dough for their own end, specifically given that you might have done it if you desired. Those good ideas also acted like a great way to recognize that other people online have similar zeal similar to mine to see more and more with regard to this matter. I believe there are millions of more pleasurable situations ahead for people who look over your site.
curry 6 shoes http://www.curry6.net

Reply supreme
7:10 AM on July 9, 2022
I needed to post you this very small note in order to say thanks yet again for these spectacular advice you have shown on this page. It is certainly tremendously generous of you to give without restraint what a number of us would've sold for an ebook to end up making some dough on their own, notably now that you could possibly have tried it in the event you desired. The ideas likewise worked to provide a easy way to be sure that most people have similar desire just as my personal own to grasp lots more in terms of this matter. I'm sure there are millions of more pleasurable opportunities up front for those who start reading your blog.
supreme http://www.supremes.us.org
123...5Next »